Paper – From the Silk Road to the Cloud

Paper – From the Silk Road to the Cloud 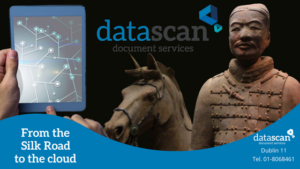 Something we use every day, in such a simple manner can often be taken for granted but the wonderful white paper we write on has an interesting history.

Although parchment or papyrus can be traced back to the Egyptians, actual paper was invented in China, around 100 BC, by a gentleman called Ts’aiLun. It’s noted that he created paper by finely chopping mulberry bark and then mixing it with hemp rags and water. After mashing it flat, this government official pressed out the water and left it to dry in the sun. Et voila, paper was made.

The paper was highly regarded in China and is soon spread around the world. People valued the new paper as the bamboo or silk that was traditionally used to write on was either too heavy or too expensive, making these options unreliable and inefficient. Around 600 AD, Buddhist monks started to investigate ways to mass-produce paper for their prayers. Woodblock printing came along and then around 740 AD, printed newspapers were circulating around China.

The Journey of Paper

650AD  Paper spreads to Europe, the Middle East, and Asia.

As paper very quickly spread to different countries, paper mills were soon set up in Baghdad, Cairo and Damascus. It is noted that Korea and Japan still make paper by hand today, following the age-old tradition.

Papermakers from Italy worked to improve the initial technique used for paper-making. They introduced using water to help power the machines, and also dip sizing, to change the papers surface properties.

The growing demand for paper resulted in technology becoming more advanced. It is thought that the French Revolutionaries were the first to use white paper, after the French man Claude-Louis Bertholett chemically bleached the pulp in 1785, thus giving us white paper.

The 19th and 20th Century saw paper production in full swing, with it becoming fully automated.  New materials were developed, leaving the industry to grow rapidly and meet demands.   Paper was now being used for writing, printing, wrapping goods, creating art and currency and even to smoke tobacco.

The Future of Paper

When thinking about paper, one simply cannot imagine the world without it.  As we become more aware of protecting our environment, people are moving more towards a paperless office where they can reduce the use of paper in everyday life. Unless it’s absolutely necessary, people can opt to have their statements sent online and receive correspondence via email, instead of letters. Known as digitisation, going paperless involves turning documents into paperless form, therefore saving money, space, and boosting productivity. It is also a much safer option for keeping personal data safe and secure in the cloud.

It’s been a long journey from China to the Cloud but an interesting one.

This website uses cookies to improve your experience while you navigate through the website. Out of these, the cookies that are categorized as necessary are stored on your browser as they are essential for the working of basic functionalities of the website. We also use third-party cookies that help us analyze and understand how you use this website. These cookies will be stored in your browser only with your consent. You also have the option to opt-out of these cookies. But opting out of some of these cookies may affect your browsing experience.
Necessary Always Enabled

Google Analytics. These help us understand how visitors gain access to our content and interact with it.  Analytical cookies are set by third parties such as Google Analytics. We collect information on which webpages visitors go to, how often and to ensure our site pages are working properly. To opt out of being tracked by Google Analytics across all websites, please visit  https://tools.google.com/dlpage/gaoptout

SAVE & ACCEPT
Go to Top