The Transformation of a Doctor’s Surgery

The Transformation of a Doctor’s Surgery 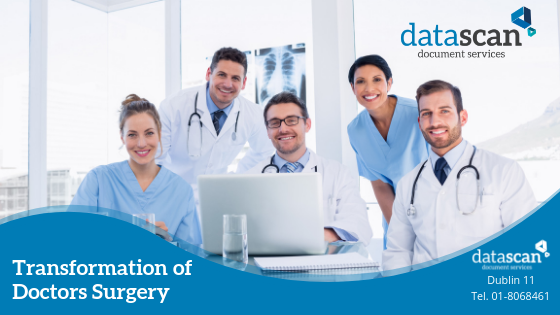 Mary White was practice manager in a large multidisciplinary primary care team in Co. Wicklow and she speaks with us about her experience of working with Datascan.

What challenge did you have that lead you to contact Datascan?

About 10 years ago I was practice manager in a busy doctors surgery.  It was an established practice which had old notes from patients going back years which were stored in sheds at the rear.  When a request for information came in, we would have to go searching through the files.  What we found was that many were not in the right order as they had been filed incorrectly.  There were shelves of files of all types and having to search through them regularly was not a pleasant task.   It was also frustrating as it led to delays in getting information to patients.

There was always a concern that information may be lost or not placed back in the correct file.  As every piece of paper was kept, there was a worry about holding onto all this information and wondering if some of it should be destroyed.  The paper itself was starting to deteriorate, many were already in poor condition at the time.

Initially we decided to scan each file ourselves, however, quite quickly it became obvious this would not be a viable option as the task was too great.  It was tedious work that staff didn’t enjoy, and they were far too busy with more important tasks. That is when I contacted Datascan.

They explained what they were doing for other medical practices and it sounded exactly like what we needed.  They sent their van to collect the first box and the data was returned to us (on a CD in those early days).  I was nervous about the process but then when I saw the results I was amazed.  It was obvious that each piece of paper was checked by hand and not only did they scan the documents, they actually enhanced the quality of any that needed it.  Old x-rays, ECG results and reports were all scanned to perfection with no missing edges or marks.  The handwritten notes were actually clearer than the originals. It was obvious they had gone to great lengths of human intervention during the scanning process.

How was your experience overall?

We started the process of getting the remainder of the documents scanned in the same way.  Although a huge volume, it was completed in a planned fashion.  The quality did not waver and it was delivered on time and in full.

We then had a fully searchable archive which immediately lead to an increase in the moral of the reception staff.  We could give information at the touch of a button and it was now a quick process when it came to transferring patient notes.  We became known for our standard of supplying information and other practices actually started to comment on it.  This was great for our image and coincided with a new IT system installation and a modernisation of the practice.  We were then awarded the prestigious ‘GP Practice of the Year’ award at the Irish Healthcare Awards in my final year as manager there.

Would you recommend Datascan?

Yes, without hesitation.  Orla and her team are dedicated to providing a quality service and they do that consistently.  There was never any hassle, they were so obliging and the delivery was always on time.  It was surprisingly good value for money and the attention to detail and quality control was second to none.   When I look back on the initial project, scanning our documents turned out to bring even more benefits than we thought it would.